The gradual death of the Archipelago

On April 18, 1997 a Japanese fishing fleet leader, carrying a Filipino passport checked into a Manado Home stay to lodge three Filipino fisherman. After checking them in he was overheard instructing the fisherman "change your clothes so we can transfer the water bombs". The tourist informed the Home stay owner, who in turn informed an immigration Justice Department official., who immediately took steps to investigate the case. Five days later two of the fishermen were finally apprehended and interrogated. The ensuing investigation led to the Harbor city of Bitung, N.E. Sulawesi, in which at least 120 illegal fisherman were arrested and deported (most Filipinos and some Taiwanese). Others were kept for further investigation of illegal fishing

practices in Indonesian waters. The investigation is continuing as only the tip of the iceberg in the raping of Indonesian waterways, coral reefs, and fish life continues. At the same time, a Japanese fishing fleet of four trawlers were outside the Harbor of Manado awaiting final clearance to go fishing. They had formed a joint-venture partnership with an Indonesian so that they could fly the Indonesian flag. They would be legal and free to roam parts of the Indonesian Archipelago. The sponsor, in fact, would only share a portion of the profits without even once going to sea! The Japanese fleet, is nothing like the local Indonesian fishing fleets, which are large wooden boats with draw lights and two way radios, this fleet of steel, loaded from top to bottom with sophisticated satellite tracking devices and all other advance technology needed, means "real" business! The advantage of this fleet is that it can track schools of fish quickly, haul the fish and load them onto partner ships, and transfer the load out of Indonesian waters undetected. At the same time, they can keep a track on any Navy or Coast Guard boat to avoid any possible detection. A problem sometimes neutralized by the easily obtained Indonesian flag they are flying. This may seem farfetched but in fact it was verified by a Filipino ship owner. He admitted he takes five to ten times the allotted quota or officially registered fish haul thus raping the seas further.

Celebes or Sulawesi, island of eastern Indonesia, one of the larger islands of the Malay Archipelago, situated east of Borneo and west of the Moluccas. It consists mainly of four peninsulas separated by deep gulfs, with two of the peninsulas extending southward and two northeastward. This singular conformation gives the island a coastline of about 5630 km (about 3500 mi). The surface reaches one of its highest elevations in Mount Lompobatang, an extinct volcano in the southern part of the island 2871 m (9419 ft) high. A number of active volcanoes are also found in the eastern end of the northern peninsula, but most of the volcanoes have reached the latent stage. The largest river is the Sadang, which is navigable by small boats.


The climate is tropical, but somewhat modified by the elevation and the proximity of the sea. Among the animals peculiar to the island are the tailless baboon; the babirusa, with upper canines curved backward and nearly touching the forehead; the marsupial cuscus; and the sapiutan or wild cow. The forests include oak, teak, palm, cedar, upas trees, and bamboo. Cloves, nutmeg, spices, tropical fruits, corn, rice, tobacco, and sugar are raised. The coffee crop is not large, but is of superior quality. The minerals include gold, copper, tin, sulfur, salt, and diamonds and other precious stones. Among the chief items of trade are coffee, spices, copra, coconuts, and trepang, an edible sea slug.


The Portuguese first sighted and named the island in 1512, but from about 1607 the Dutch gradually obtained supremacy, although it was not until well into the 19th century that every district was under their control. Under the Dutch the island formed an important province of the Netherlands East Indies, consisting of the Celebes government in the southern part of the island and the Manado residency in the north. The capital of the Celebes government and chief port of the island was Makassar (now Ujung Pandang), situated on Makassar Peninsula, on the Strait of Makassar. The seat of the residency was in Manado, at the end of the Manado Peninsula on the Celebes Sea. During World War II, the Japanese held the island from 1942 until 1945. In 1946 Celebes Island was included in the autonomous state of East Indonesia, a part of the new United States of Indonesia (now Republic of Indonesia). Area, about 189,070 sq km (about 73,000 sq mi), population (1990) 12,522,000.

February 1996, huge trap net constructions are erected along the northeast tip of Sulawesi, north of the funnel at the Lembeh Straits, along the Tangkoko Nature Reserve. A joint venture project of a Taiwanese Fishing & Sea food company, and high ranking Indonesian military & ex-military officers (including the ex-head of the secret service).

April 3,1997, an American tourist, Robin Marinos accidentally stumbles upon the nets and films the hauling of the nets. Films the killing of a Whale shark and other related material.For 5 weeks the tourist became activist, constantly campaigning in North Sulawesi to permanently remove the killer nets after investigating the operation and discovering the nets are along a migratory path and the company was operating outside of international and local laws.Using all the possible avenues available, with the help of the many local allies, the activist brings local public national and international attention to the issue and the detrimental consequences of such nets operating unabated.

Beginning May 1997, at the peak of a sabotage campaign, which included several life threatening situations, a timely invitation to an important conference in Singapore yields results. The Indonesian government orders the removal of the nets.

May 9, 1997, a government envoy promises permanent removal of the nets in a secret meeting.The activist receives an award from the Lembeh Preservation Society, a strong ally during the campaign. Also is a special guest speaker at the ADEC Conference, and top exhibitor at the conservation exhibition, thus publicly and internationally exposing and denouncing the use of any such trap nets.

September, 1997, the Indonesian government reneges on its promises, bowing to corruption and ignoring laws thus allowing the trap net operation to reopen, this time with security measures.Soon thereafter a major campaign is re-ignited that includes many previous allies as well as new ones, using the information and footage of the previous campaign to smash the company and its government allies. CNBC's investigation and consequent continuous broadcasting of this information had strong impact.

November 1997, the national government openly denounces such fishing practices and expels the Taiwanese company from Indonesia.A legal investigation was started, but was put on hold due to the monetary crisis.The initiative started by Robin Marinos and the Lembeh Strait Society to convert the North Lembeh Strait area reaching to the North east border of Manado to form a National Marine Sanctuary is being considered. At present it is on hold due to other governmental priorities. The drive to protect this pristine area will continue until the desired results are achieved.

The boat enters the maze of trap nets from the far side (north side), then drives southward scaring roaming fish toward and into the final floor "Tiger" trap net, eventually lifting and hauling the net, slaughtering all its contents. The nets took five weeks to construct and were completed March 1996."

On April 3, 1997, two tourists accidentally witness the slaughter of a WHALE SHARK while on way with local boatman to snorkel in Lembeh Strait. The two eventually free a large Turtle also caught in the nets. All events were videotaped and photographed.

As of May 15, 1997 it was witnessed that the nets themselves had been removed leaving behind their concrete mooring structures. By early June the structures had been rendered useless presumably by "local fishermen" and others.

A Justice Department investigation is believed to be underway (but this has not been substantiated as of yet, June 10, 1997).

A group of local landowners, businessmen and concerned residents have formed the LEMBEH STRAITS SOCIETY -- Aimed at designating the entire NE Area of Sulawesi, from Tankoko Reserve to Bunaken Reserve a protected area with restricted fishing rights. High government officials in Jakarta are believed to support this plan and have expressed concern over the reported incidents of late.

The Whale Shark, is the common name for the largest known fish, native to tropical seas around the world. The whale shark may attain a length of more than 15 m (more than 50 ft) and weigh more than 18 metric tons. Deep blue above and white below, it is darker in color than most sharks, but its body is marked with white spots and vertical lines; on its head and back are several broad, longitudinal ridges. The animal has a wide, flattened snout with the mouth at the front, not below, and its jaws hold numerous small teeth. The gill openings are exceptionally large. The whale shark feeds on small fishes and plankton strained out of the seawater by its long gill rakers; it is harmless to humans. Young whale sharks hatch from fertilized eggs inside the body of the female and are then born alive to the outside.


Scientific classification: The whale shark makes up the family Rhincodontidae of the order Lamniformes. It is classified as Rhincodon typus.

On April 3, 1997, two tourists accidentally witness the slaughter of a WHALE SHARK while on way with local boatman to snorkel in Lembeh Strait. The two eventually free a large Turtle also caught in the nets. All events were videotaped and photographed.

Preparations are made to haul pieces of the Whale shark on board. Meanwhile activists enter the bloodied nets to free a Sea Turtle and film the entire one hour slaughter.

The blubbery internal tract of the Whale Shark, typical of plankton feeders

A Green Turtle trapped in nets, rescued and freed by Activists, now members of Earth Advocates 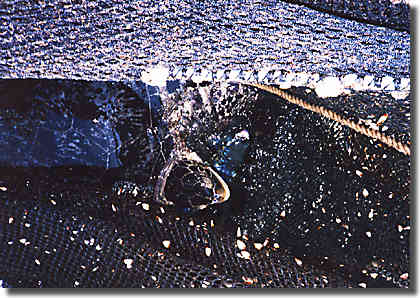