SMALL VICTORY FOR THE BEES AND THE WORLD!

We did it -- Europe just banned bee-killing pesticides!! Mega-corporations like Bayer threw everything they had at this, but people-power, science and good governance came out on top!!
Source: AVAAZ.org 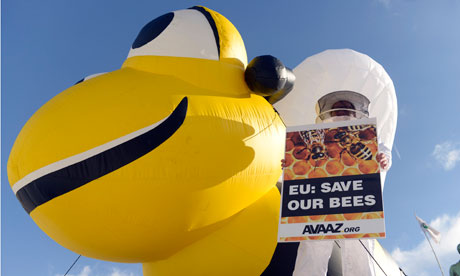 Bee "die in" at Bayer's headquarters, Cologne Vanessa Amaral-Rogers from the specialist conservation organisation Buglife, says:
“It was a close vote, but thanks to a massive mobilisation by Avaaz members, beekeepers, and others, we won! I have no doubt that the floods of phonecalls and emails to ministers, the actions in London, Brussels and Cologne, and the giant petition with 2.6 million signers made this result possible. Thank you Avaaz, and everyone who worked so hard to save bees!”
Bees pollinate two thirds of all our food -- so when scientists noticed that silently, they were dying at a terrifying rate, Avaaz swung in to action, and we kept on swinging until we won. This week’s victory is the result of two years of flooding ministers with messages, organizing media-grabbing protests with beekeepers, funding opinion polls and much, much more. Here’s how we did it, together:
Keeping France strong. In January 2011, 1 million people sign our call to France to uphold its ban on deadly neonicotinoid pesticides. Avaaz members and beekeepers meet the French agriculture minister and fill the airwaves, pressing him to face down fierce industry lobbying and keep the ban, sending a strong signal to other European countries.

Bernie, the huge inflatable bee, helps deliver our 2.6m strong petition to Brussels
Tackling industry head on. Bayer has faced Avaaz and allies protesting at its last three annual meetings. The pesticide giant's managers and investors are welcomed by beekeepers, loud buzzing, and massive banners with our 1 million plus call on them to suspend use of neonicotinoids until scientists reviewed their effect on bees. Avaaz even makes a presentation inside the meeting, but Bayer says 'no'.
Making the science count. In January the European Food Safety Agency finds that three pesticides pose unacceptable risks to bees, and we jump in to ensure Europe's politicians respond to their scientific experts. Our petition quickly grows to 2 million signatures. After many talks with EU decision-makers, Avaaz delivers our call right to the EU HQ in Brussels. Later that same day, the Commission proposes a two-year ban!

Beekeepers help deliver our massive petition to Downing Street
Seizing our chance. The battle to save the bees heats up in February and March. Across the EU, Avaaz members are ready to respond as all 27 EU countries decide whether to welcome or block the proposal. When farming giants UK and Germany say they won't vote yes, Avaaz publishes public opinion polls showing huge majorities of Brits and Germans in favour of the ban. Avaaz members also send almost half a million emails to EU Agriculture Ministers. Apparently afraid of dealing with citizens rather than industry lobbyists, UK minister Owen Paterson complains of a “cyber-attack”, which journalists turn into a story in our favour! And then comes Bernie -- our 6 metre bee in Brussels -- a powerful visual way to deliver our petition as negotiations enter the final stages. Journalists flock to Bernie, and we hear we've helped get the Spanish ministry to look harder at the science and shift position . But we didn't get the majority we needed to pass the ban.

Bernie the bee featured in The Independent
Turning the red light green. In April the bee-saving proposal is sent to an Appeals Committee, giving us a glimmer of hope if we can switch a few more countries' positions. In the final sprint, Avaaz teams up with groups including Environmental Justice Foundation, Friends of the Earth and Pesticides Action Network, plus beekeepers and famous bee-loving fashion designers to organise an action outside the UK Parliament. In Germany, beekeepers launch their own Avaaz petition to their government, signed by over 150,000 Germans in just two days and delivered in Cologne soon after. More phone calls rain down on ministries in different capitals as Avaaz responds to a last-minute wrecking amendment by Hungary, and positions Bernie the bee again in Brussels. Pesticide companies buy adverts in the airport to catch arriving officials, and take to the airwaves suggesting other measures such as planting wild flowers. But their slick messaging machine is ignored, first Bulgaria then -- the big prize -- Germany switch their stances and this week we win, with over half of EU countries voting for the ban!
It’s been a long haul, to get this win, and it wouldn't have been possible without scientists, specialists, sympathetic officials, beekeepers and our campaign partners. We can be proud of what we've helped to accomplish together.
One strong bees advocate, Paul de Zylva, head of the Pesticides and Pollinators Unit at Friends of the Earth said:
"Thanks to millions of Avaaz members who mobilised online and in the streets. Without a doubt Avaaz's massive petition and creative campaigning helped push this over the edge, complementing our work and that of other NGOs."
It's time to celebrate this breathing space for one of the earth's most precious and important creatures. But the EU ban is only in place for 2 years pending further review. And around the world bees continue to die from the pesticides which weaken and confuse them, as well as from loss of habitat as we plough up and build over the countryside. In Europe and across the world there's lots of work to do to ensure sound science guides our farming and environmental policies. And we're just the community for the job. :)
With hope and happiness,
Ricken, Iain, Joseph, Emily, Alex, Michelle, Aldine, Julien, Anne, Christoph and the rest of the Avaaz team
PS: Let's keep this going -- chip in to ensure we can launch rapid-fire, multi-tactic campaigns on the issues we all care about:https://secure.avaaz.org/en/bees_victory/?bjYbsab&v=24665

PPS: Many Avaaz campaigns -- like the German beekeeper one this month -- are started by individuals or groups of members. Just click here to see how easy it is to start yours right now:http://www.avaaz.org/en/petition/start_a_petition/?rba13