The Live Fish Trade industry has largely contributed and continues to contribute the systematic destruction of the Worlds Coral Reefs, the Targeted Fish Species, and the overall condition of the Seas. This must be stopped soon through tough International and national regulations and controls. The worlds corals Reefs are already over 70% damaged, of which an estimated 40% are irreversible damaged! 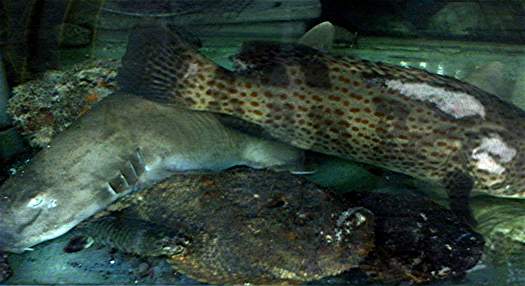 Regulation must be made to protect fish population and allow reproduction and growth to maturity of specific species, by placing limits on the catch pre season and limiting catching of specific species to certain seasonal periods only. Also disallowing the catch and holding of impregnated or juvenile fish unless for specified and licensed breeding or reproductive purposes. This is needed to protect and better guarantee the specific Species healthy survive and ecological distribution to obtain a healthy balance in the seas! 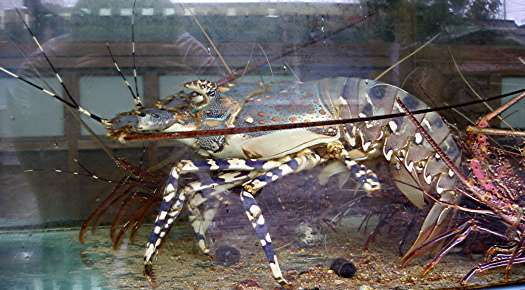 Here a large wild Lobster instinctually tends to her eggs and the future generation of such Lobsters, that will never be for she will be steamed with her eggs for some careless Tourists by an Ignorant Restaurant owner who may be contributing to the extinction of his restaurant when there are no more such Lobsters and other species treated the same. Photo May 2006.

Lobsters are being systematically and irresponsibly caught to extinction. Poisons are also heavily used to catch Wild Lobster. Anywhere known for Lobsters, fisherman have reported there a few to be caught. Impregnated , lobsters carrying eggs must be Legally Protected keep only reproductive breeding purposes only or released back to Nature. Heavy fines must be laid on fisherman and Restaurants holding such for strict

The situation of using toxins as Potassium Cyanide is worse than ever. Potassium Cyanide seems to be available and easily purchased throughout SE Asia, even typically in remote villages from Chinese merchants. For land use Cyanide is used excessively for mining activities, along the coast and in the seas it is used illegally to catch fish, prevalently used in the 'Live Fish Trade'. Either way the toxins end up in the ground water supply, food supply, and in the seas. It stuns and kills our essential future life supplies, plus creates unproductive dead holes in the worlds ecosystems, and consequently often is ingested by humans. Legislation to control the production, import, and use of certain poisons like Potassium Cyanide would be a sensible move to protect the general population and nature from those who have so far irresponsibly damaged more then the short term profits were worth!

Lobby for Legislation and Enforcement measures to control and monitor the 'Live' and 'Ornamental Coral Fish' Trades.
These trades are environmentally damaging and often use illegal methods to catch the targeted fish. Both practices have scarred the reefs and created a drastic imbalance within coral reefs, hunting certain species of fish to extinction. For a start, we recommend the total and immediate elimination of such operations and their practices in, or around certain areas, to include all National Parks and Reserves, and other sensitive areas. There should not be the existence of such operations, e.g., businesses within a 30 kilometer radius of protected areas. Strict enforcement of laws, followed by heavy penalties to lawbreakers would be required. The Live coral fish trade can be divided into two major trades, a) the consumer trade, and b), the ornamental fish trade. Despite the similarities that they both target specific species of fish and focus almost primarily on Coral Reefs dwelling fish, they do have distinct differences and will be treated so.

The Live Coral Fish Trade for consumption is widespread throughout SE Asia, and has left a devastating trail of destruction upon nature, specifically its Coral Reefs. Cyanided fish suppliers are the primary source/supplier of eatable 'Coral Dwelling Fish' in Asia's major cities. Restaurants all over SE Asia are serving high costing Oriental fish favorites, as the renown and quasi protected species 'Napoleon Wrasse', or the many Grouper Species as the Potato and Brown Spotted Grouper. Today these types of fish are primarily caught using Potassium Cyanide. We seek national and international legislation and guidelines to ban fish dealers from selling Cyanided fish, and retailers (restaurants) from serving such fish. Unfortunately, often it is difficult to spot cyanided fish, currently however many restaurants are knowingly purchasing and selling poisoned fish to the public, including protected species. And this without the worry of repercussions due to the lack of guideline, law enforcement, and a viable Consumer Protection Agency.
Investigations during June 2000, Earth Advocates found that over 80% of popular fish food restaurants surveyed in Jakarta, including the "Dua Musim" and "Ming" Restaurants were not sure nor cared if they were receiving and serving cyanided fish to the public. Many admitted they knew but could do nothing about the situation since there existed no other reliable suppliers. And since no authority has condemned or monitored the cyanided consumer fish trade, it would continue until it become too expensive to find the last existing fish. 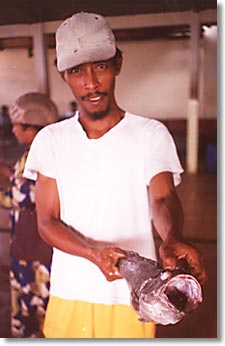 A fisherman holding an obviously Cyanided fish, as its eyes burst from the eye sockets. A large percentage of these fish don't survive the cyanide to the restaurants holding aquariums, but end up on the dinner table anyway!

We encourage and support the efforts of Marine and Medical Scientists to find a quick, cheap, and effective Cyanide testing methods, in the form of rapid testing kits. The sooner such testing methods are developed the easier to implement and enforce current laws and create new laws with corresponding penalties and consequences to lawbreakers. Once such quick testing methods are developed, then the burden of guilt would fall upon both the supplier and traders, down to the restaurant owner, who all should have access to testing kit and understand the consequences of not testing.
To little effort is being made by Asian governments and their law enforcement authorities to protect consumer health and enforce existing laws which prohibit the use of poisons to catch fish. We will lobby for, help create, and endorse public awareness programs set on educating the public and suppliers alike.
"The problem has all but wiped out the Lobster and Wild Shrimp trade in South Java due to the destruction caused by Cyanide Fisherman and excessive Trawl fishing!", this according to one of Indonesia's major Lobster and Shrimp Exporters, in Pangandaran, Java.

Sharks a targeted Species for Restaurants and Aquariums

Shark are also targeted and becoming extinct due to the over fishing and the live fishing trade. Earth Advocates have found many restaurants in Asia offering live baby shark in Aquariums as meals. In most areas fished by the live fish hunters and Shark fin hunters to extinction. Most Shark species are territorial, and when they all are taken or killed, they will never be replaced nor can reproduce. This in turn, could have devastating effects on the healthy survival of other fish species in the seas. Shark are at the top of the fish food chain and their existence is relative to the survival of other fish. This senseless killing must be stopped!

We are committed to continue our support to Tony Wu and Michael Aw in their 'Save the Sharks' Campaign!! This campaign has recorded small successes which are mentioned in 'Successes' section. For more information concerning this campaign contact; www.OceanNEnvironment.com.au

Uncontrolled Aquarium Fishing, sometimes with Potassium Cyanide systematically wipe out targeted species all over Tropical Reefs. Here a juvenile Lion fish surrounded by Cleaner Shrimp in Nusa Dua, Bali. About 75% of Aquarium fish do not survive the first year.

The Multi-million dollar trade, over 20 Million tropical fish sold in the USA alone and as many in Asia, the irresponsible ornamental fish trade needs to be seriously reviewed. Our 13 year experience can verify that many Aquarium fish dealers are involved in the cyanide fishing trade as well and most are eliminating targeted fish species from the seas! Marine Aquarium Council (MAC) and other such organizations lack of genuine responsibility toward combating the pillage of desired as well as all marine species. Not active enough in the preservation of all marine species and their natural habitats. Or in combating the cyanide and dynamite fishing trade going on in 70% of the worlds Coral Reefs, or combating any other forms of non sustainable fishing! All these groups are responsible for destroying the future of the Coral Reefs first by supporting the stealing and killing of the fish and their habitats, and not earnestly fighting those who actively destroy the Reefs. We think the world would be safer, healthier, and a better place if they would leave the fish where they belong and learn how to dive, snorkel, and look instead. The greedy, selfish, and short sighted traders, should be regulated and taxed so high that they will reconsider their priorities of life. And those who steal, or destroy fish or the fish habitat for ornamental purposes without the correct permits and taxes paid for, should be penalized so high so they won't trade any more. The MAC and such types of organizations are just another bunch of scavengers making money off natures innocence and their trade should be banned!