An Increased number of Sharks reported in some Protected or Zoned Areas, 2006

Through the continual pressure by local and foreign NGO's as Earth Advocates to zone off specific areas too allow fish stocks to recover and to protect Shark populations from total extinction has been showing good results. An attempt to re-balance the Marine ecosystem in such areas has been very promising. Earth Advocates have discovered an increased number of mature, and especially juvenile sharks in such protected zones. Such zones have been established in many tourist areas were recreational water sports as diving are practiced.

There were also sightings of pregnant Sharks, as sighted by Robin Marinos whilst free diving during June 2006, off Lombok's Gili Islands. This Black Tip Reef Shark is in the process of giving birth.

Read more: An Increased number of Sharks reported in some Protected or Zoned Areas, 2006

Earth Advocates will focus on seeking National Park Status for areas within the Makassar Straits along East Kalimantan. The 'Makassar Straits Marine National Park', would include the Berau area of East Kalimantan and some remote Island groups within the Straits. This area was surveyed by Earth Advocates during July/August 2000 upon an invitation by Michael Aw, founder of OceanNEnvironment. The endeavor label "The Makassar Straits Expedition", included discoveries which led to the decision for Earth Advocates to campaign and lobby for immediate national park status for this area. This special and highly bio-diverse region is essential for supplying nutrients and environmental balance to other areas of the Archipelago. The general report concerning the expedition will be presented to Indonesian government officials and environmental specialists. 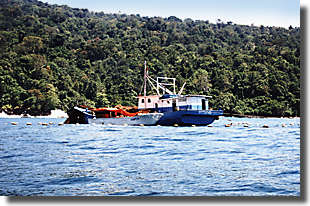 This victory has been our "claim to fame". This accomplishment is the one which encouraged Robin Marinos to start the Earth Advocates. It is also the story which reveal the most negative impact against the Environment, as can be read from the reports and chart. This is the action that was energy intensive and required spontaneous strategies, as comparable to "the one hunting being hunted at the same time"! A matter of, being one step ahead, and staying ahead.

Read more: Killer Trap-Nets banned in the Lembeh Straits off the coast of Sulawesi

During the summer 1997, after the successful closure of the Trap nets operation, Robin Marinos arrived to Bali, Indonesia, to discover that there had been many small constructions built on the main beaches of Bali, and there were a number of new ones under construction. The constructions were build directly on the sand blocking the view and passage of beach comers, and were dangerously constructed. On a beach with extremely high tides and waves exist, and where surfers and swimmers could be injured from broken off slabs of cement from these beach constructions, as was the case. Read more: Illegal beach construction stopped in Bali

It has taken one and half years to get this protective legislation, now its time to seriously implement the protection laws! We still need to get rid of the slaughter grounds, holding pens, and the illegal trade forever!! This is a great success, because we know we have the law on our side, but the battle is still not over. This is the longest running campaign and the most difficult, however we are confident that we will be successful in stopping the pillage here.

Earth Advocates Sea Turtle Campaign was instrumental during the year 2000 in convincing the Balinese Governors office to sign the Decree No. 243 issued on June 12, 2000, that states the trade of endangered and protected species, including the green turtle, is prohibited. The decree terminates the previous decree, No. 22/1990, which allowed up to 5,000 green turtles to be traded in Bali per year.
Earth Advocates were also instrumental in convincing the Government to take action and enforce the laws after pressing criminal charges against two of the major dealers. Only after a meeting with top conservation department, and enforcement authorities was any action taken, which lead to the confiscation of boats, arrest of top dealers, and eventually the trial of the top kingpin. One can read more about this in the 'REPORTS' section, "Save the Ancient Mariner".